We’re working on new resources which will invite you to get creative with objects from the Science Museum Group Collection using Scratch. These resources are in beta mode and are currently being evaluated.

What you will make

A fun game where you need to find hidden objects.

You can see the finished game here:

What you will learn

What you will need

The project we just copied already contains 24 sprites but (almost) no code yet.

We will develop the game in 4 steps:

If an object doesn’t behave as expected, check that it has the same code as the other objects.

Now that the basic game works we will improve it little by little in the next sections. We will add:

Test that Object-Dress flashes when Cheat button is clicked or the C key is pressed.

Test that all the objects flash when Cheat button is clicked or the C key is pressed.

There are programming mistakes (bugs) here:

Let’s fix issue #1 by adding these scripts to Stage. Let’s fix issue #2 by adding a go to [front] layer block at the end of the define show block in Help screen. To fix issue #3 we are going to use All Objects. It contains 20 costumes, one per object to find. We are going to create 20 clones. Each clone will show a different costume and we will arrange the clones in a grid with 4 rows and 5 columns. Each clone will also have its own id variable which will contain a number between 1 and 20. This variable will be used to select the right costume and also to display the right description when the clone is clicked. All Objects already contains a descriptions list with a description for each object.

You already met Scratch clones in step 4 of this activity. There we created 20 clones of All Objects to display all the objects in the help screen.

A clone is a temporary copy of a sprite created by create clone of (). Each clone has its own attributes like position, direction, size, color, and pen. Variables can also be used to differentiate multiple clones of the same sprite (like id in All Objects). All the clones are deleted automatically when the project is stopped or restarted. A clone can also delete itself with delete this clone. When a clone is created it will execute the code under when I start as a clone.

Clones are for example used to create projectiles or enemies in shooting games, to create a school of fish in underwater games, for special effects, etc.

Here are a few resources to find out more about clones:

Choose an object and modify the code under define animate. For example you could:

Don’t be shy! Use your imagination! 🤪

Hint: You will probably need a new CHEAT CLICKED? variable (initialized to “no” at the start of the game).

Currently the game is a bit boring because the objects are always in the same positions.

One way to improve this is to make each object go to a random position using go to (random position) when the game starts. However this has the disadvantage that the objects could overlap each other or be too easy to see against the backdrop.

Challenge: Can you think of a better solution?

Currently we have separate sprites for the objects to find and we had to copy all the code from Object-Dress into the 19 other sprites. All this copying is very tedious and is bad practice in general. For example think about how slow it would be to modify define animate for the 20 sprites.

A better option is have a sprite with one costume per object and clone it. This sounds like All Objects and we could modify its code but it will be simpler to duplicate it instead. Duplication is bad in general but we have to be careful not to break the All Objects code arleady in place for the help screen. At a high level we need to:

One option to position each clone is to have an if <> then block for each object: 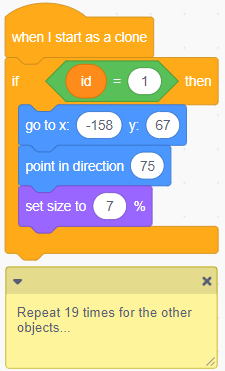 but this means lots of code and will not scale up well. A better solution is to have lists with the position, the direction and the size of each object and the code becomes very simple: 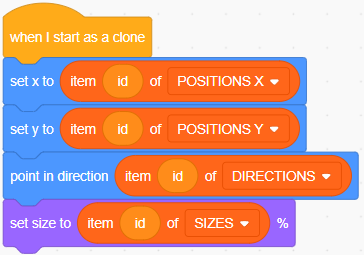 Currently the help screen displays all the objects the same. It would be much better if it would grey out the objects which have already been found.

Greying out a sprite can be done easily using set [ghost] effect to (). But how do you keep track of what objects have already been found?

Hint #1: You will probably need a new OBJECT IDS FOUND list which will be reset every time the game starts. When an object is clicked, its id will be added to the list.

Hint #2: It will be easier to do this task after idea #4 is complete.

Scratch is an awesome environment for beginners and amazing projects can be achieved with it but it has limitations. So you will probably want to move to a programming language like Python or JavaScript in the future. In these languages the code is described using text instead of blocks but most of the concepts stay the same.

Go to leopardjs.com, enter the URL of your Scratch project (which must be shared) and click the Edit button.

After a few seconds you should see the JavaScript code. For example the code for Marian will look like this:

The Manual page explains how each Scratch block gets translated to JavaScript: 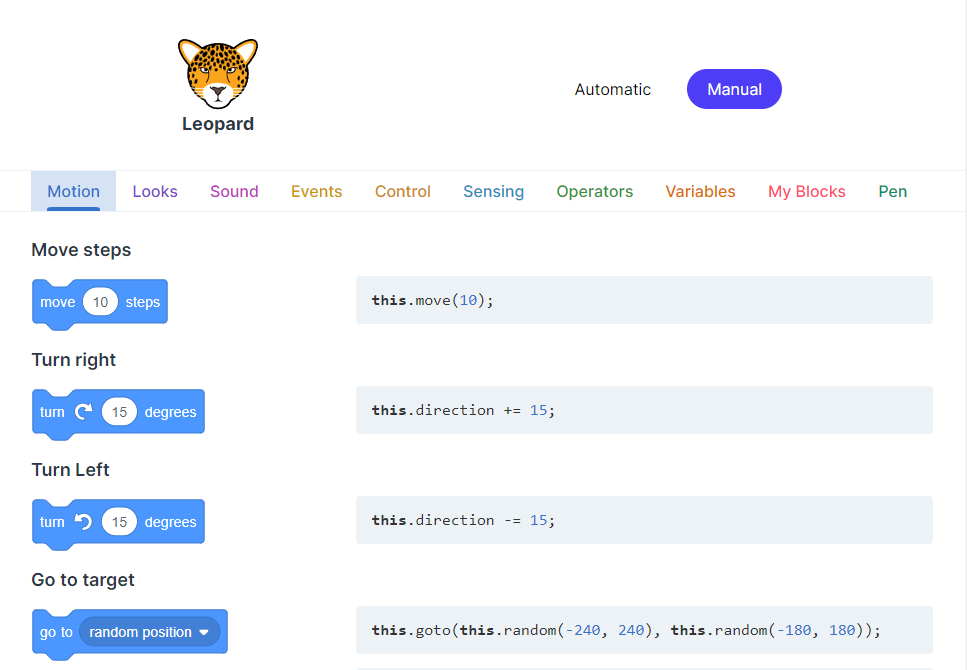